The ratios are widely used in analysis because the book value of equity in a bank is given more weight than in other sectors due to market-to-market and regulatory capital rules. Book value as the denominator in PBV is also much less affected by the economic cycle than earnings as the denominator in price/earnings ratio.

The upper graph below clearly shows that the three largest Indonesian banks' PBVs are much higher than banks in some of today’s hottest banking sectors.

PBV of “1” means that you can buy banks close to its liquidation value, which is not bad. Historically, top banks were considered cheap when they were priced around book value, and expensive when they trade for two times of the book value and higher.
With PBV lower than 1 (except JP Morgan), world’s largest banks are still being penalized either for credit quality trouble or low returns. Some investors out there might also hold skepticism over their business model, or accounting used to arrive at book value.


The Indonesian bank stocks in this comparison hence look very expensive indeed and probably not priced for any disappointment like inflation or problem loans being much higher than expected. 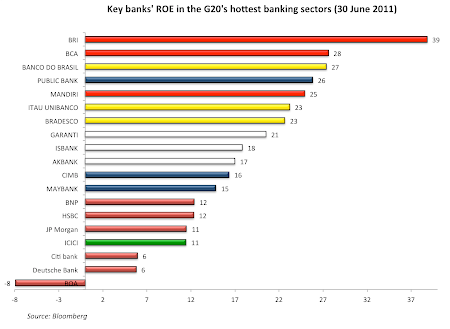 The lower graph shows high ROE of Brazil's and Indonesia's top banks with Bank Rakyat Indonesia (BRI, the second largest Indonesian bank) handing down a walloping return on equity of nearly 39%. Note that high returns have been around for sometime in these countries (not shown in this occassion). 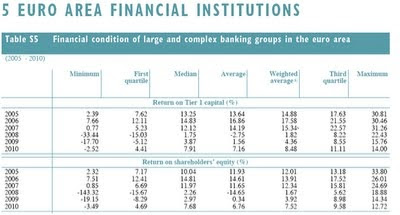 Profitability under upcoming regulations
The central bank (BI) has recently introduced a Prime Lending Rate disclosure requirement. This is a welcome initiative (though not yet a game changer) that would improve transparency and market competition.

As is well-known, high NIM has been a key driver of Indonesian banking sector's profitability. Despite a relatively competitive market structure (btw, not necessarily competitive behaviour), the NIM of large banks, in particular, has stayed high thanks to low-cost current and savings accounts, or CASA, which make up a large portion of banks' core funding.

Unlike (big) debtors and depositors, savers have a limited price awareness and likely put up with low saving yields. While lending rates might fall thanks to improved disclosures, compensation to saving public remains low, or might be pressed further down as banks attempt to retain their high NIM. Lack of saving rates transparency and obstacles to switching accounts do not help to raise responsiveness to saving returns.

Enhanced consumer education and protection can counter some of the forces behind the high returns on equity obtained at the expense of other stakeholders, i.e. savers/depositors.
Future regulatory landscape would also erode the advantage of CASA. For example, under the new liquidity standards of Basel 3 - CASA will receive less favorable weight as compared to time deposits. This means that cost of fundings is going to rise provided a proper implementation of the Basel 3 standards.

What goes up must come down
The supercharged profits and valuation in Indonesia are partially for the right reasons. Growth data looks healthy and inflation has dropped for six months. On the other hand, the stellar performance in the financial industry has been enabled by short-term capital inflows, commodities export boom and also, loose regulations permitting banks to take on more asset and liquidity risks. The issue being flagged here is the danger of taking unnecessary risks due to an 'addiction' to unusual returns on equity.

Business conditions can be less benign or hit by unexpected event as such that without a closer supervision, bank managers may choose to load up on riskier, high-profit margin loans to dodge downward pressures on the return on equity. Other scenarios are possible as well. When lending rates decline due to lower risk premium and optimism, lenders might also increase risk taking in 'search for yield', which can cause trouble if they search too hard for it.

A very insightful case study on the failure of Northern Rock shows among others how the bank sustained its high return on equity by increasing leverage, employing a more aggressive funding model and resorting to a higher overall risk profile as credit margin fell and regulators were getting complacent.


A small case study on failure to grasp the basics of value creation
The huge profit growth does not only belong to large Indonesian banks. One small bank, Bank Mutiara (yes, formerly known as Bank Century that was rescued by Indonesia’s Deposit Insurance Corporation - LPS) has recently released dazzling figures, posting a 247.8% profit surge. Its company website reports ROE of over 58% in H1. On the other hand, its capital adequacy ratio fell to 9.3% (very low) from 12.8% (low) a year before while its breach with the central bank’s large exposure rule was reportedly much higher over the same period, indicating higher concentration risks.
The owner, the aforementioned LPS, seeks to sell the bank in August 2011 at more than 8 times book value of equity!

With that last minute credit acceleration, the bank has tried too hard to impress would-be investors. The rapid credit expansion before the target date of divestment is planting the seeds for failure down the track. I believe Bank Mutiara and LPS should come up with a more credible, longer-term divestment strategy instead, since the talking of sale target this year and the hiring of financial advisors are actually quite a waste of time and money.

The flawed focus on short-term performance measures reminds us of the famous interview with Jack Welch, who is regarded as the father of the “shareholder value”. Mr. Welch said that “…short-term profits should be allied with an increase in the long-term value of a company. On the face of it, shareholder value is the dumbest idea in the world,”. Furthermore, “Shareholder value is a result, not a strategy .. . Your main constituencies are your employees, your customers and your products".

In a nutshell, Bank Mutiara should have no delusion of being capable of creating shareholder value in a short period of time by bolstering income through overextended credit growth.

Concluding remarks
Following the bail-outs in response to the 2008 financial crisis, the public in the U.S and Europe has questioned if the supranormal return on equity was really something bankers should be proud of, if it had been obtained by repressing deposit rates, charging elevated lending rates and service fees, or just exploiting expectations of government support through excessive risk taking and size expansion.

Valuation and profitability of several Indonesian banks are staggering. Based on early warning signals, the regulator should be alert on the sector's drives to sustain the excess profitability by engaging in highly risky entrepreneurial activities on the back of perverse incentive schemes that include excessive bonuses and compensations.

Especially the pursuit of a profit in the short run is not consistent with the stability that especially systemic banks should be about. We know that de facto, large banks will be protected by the government since the damage to the economy caused by their failure would be too great. Even a bank as small as Bank Mutiara might be supported again by public funds in case of another failure.

The banking sector's excess profitability or an appearance thereof can also lead to misallocation of scarce resources.

Think of the latter in terms of high-talented young engineering graduates going into the financial sector as it pays much higher salary than engineering and manufacturing sectors.
The importance of fostering employment in production-oriented sector and new economic activities is substantiated by Dani Rodrik (2011) here.

Closer supervision and adoption of sound regulatory standards might make Indonesia’s banking sector less lucrative eventually, but the country will have the benefit from having fewer bank failures and more sustainable economic growth.
at 11:26 AM 1 comment: