The Indonesian Deposit Insurance Corporation (“LPS”) recently announced a plan to calculate deposit insurance premiums based on a rating model.

Many countries have applied differential premium systems successfully (eg. here, or here). So the plan to adopt this good practice is a move in the right direction.

The issue that I want to raise now is that LPS needs to improve not only the way it charges premium but also to remedy other distortionary features of its deposit insurance scheme.

A risk-adjusted premium setting would help strengthen the banking sector and reduce moral hazard as it encourages Indonesian banks to behave well to avoid paying higher fees to LPS.

Moral hazard is defined here as a situation when a stakeholder makes less effort to avoid misfortune, or tends to take risk as other stakeholders (also) bear the costs of failure.

LPS' rating is ideally robust from gaming. There is a saying (roughly describing Goodhart's Law): "when a measure becomes a target, it ceases to be a good measure".
Designing a risk model to determine insurance premium charges would necessarily involve a lot of thinking about economics of it and its impacts on behavior of stakeholders.

Some questions need to be asked, for examples, will LPS measure and quantify systemic risk? This means that all else being equal, larger banks or highly interconnected banks should pay higher premiums per insured deposits than smaller banks. Will the scoring model account for pro-cyclicality as banks tend to be better rated in good times? How important are qualitative and override factors in the rating model?
These are strategic and technical points that LPS would hopefully consider when designing a differential premium system.

Above all, the project should  not distract LPS from recognizing and remedying even more crucial flaws in the current deposit insurance scheme. These flaws, to which we now turn, have contributed to the build up of systemic liquidity risks in the Indonesian banking sector.

Key and unique features of Indonesia’s deposit insurance scheme that are questionable include a very high coverage amount, the world’s highest in per capita GDP (see the chart below), and the use of so called "guarantee rate", or "insured interest rate", to define coverage.

The latter means that LPS’ insurance does not cover deposit accounts with an interest rate exceeding LPS’ guarantee rate, which is reset periodically.

In response to the financial crisis in October 2008, LPS raised its deposit coverage by 20 times to IDR 2 billion and kept it unchanged since then. Neighboring countries have slashed their deposit insurance coverage to a level that is consistent with the main mission of any deposit insurance corporation: to protect savings of average depositors without substantially undermining market discipline. 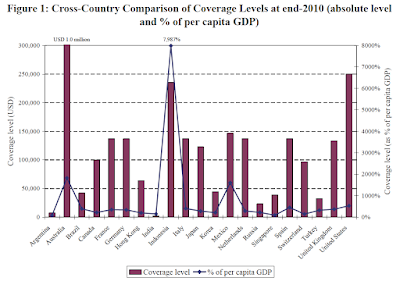 
The generous coverage in Indonesia may lead to LPS's funding shortfall when one or two small-medium sized Indonesian banks fall. In addition, the outsized deposit insurance coverage will likely spur the whole banking sector to take greater liquidity mismatches as they assume LPS will cover the downward risk for the retail funding. This is a kind of moral hazard on the part of the banking sector as evidenced by the growing share of CASA (current account and saving account) deposits (of which cheap sight savings deposit is a major component), especially among larger Indonesian banks.

One might argue that the moral hazard is limited since the insurance coverage is only intended for deposits with interests below the guarantee rate. Under this term and condition, LPS could prevent unbriddled competition in deposit markets and overcome the moral hazard on the part of depositors since they cannot accept high interest rates while expecting LPS or government to bail them out in case of need.
In other words, depositors accepting high interest rates will still be incentivized to monitor their banks and promote the desired market discipline.

Nonetheless, the case for the guarantee rate feature is contestable. It can for instance distort the effectiveness of central bank’s interest rate policy decisions or undermine the transmission of monetary policy as deposit rates would not promptly move in tandem with the policy rates. Given the shallowness of interbank and debt markets, the responsiveness of retail deposit sectors is pivotal and should not be inhibited by a rate ceiling.

It is also dilemmatic. If the guarantee rate is too high, LPS will have to insure  more deposits base, hence perpetuating moral hazard.

If the rate cap is too low, then it could cause interest rate repression that favors financial intermediaries at the expense of depositors. If real deposit rate (deposit rate - inflation) is too low or even negative for too long, saving will be discouraged, weakening Indonesia's economic fundamentals.

Furthermore, the effect of the deposit insurance design on bank competition is a big omission in current discussions (if any). In my view, a low guarantee rate would distort competition in deposits market.
A bank may be able and willing to offer attractive deposit rates because they are operating in a profitable niche segment and at a lower cost - or may be willing to pursue lower returns on equity while growing market share. So it does not mean that gaining market share by offering higher saving rates represents unjustified risk taking.

The existence of the guarantee rate makes it impossible especially for promising smaller banks to challenge bigger banks.

Paradoxically, for smaller banks with weak business models, (low) guarantee  rates may help keep them alive as they benefit from a cheap access to retail funding despite their poor rating.

In a nutshell, the rate ceiling, which effectively weakens competition in deposit taking business and disadvantages savers, should not be used as a tool to discourage excessive risk-taking. The solution to the problem of  undue risk taking is more demanding capital and liquidity requirements!

If the moral hazard is to be minimized, LPS can attempt the following measures, ideally to be introduced as an integrated reform package:


a. Lower coverage
Insured deposit should be reduced to a level comparable to neighboring, peer countries (e.g. Malaysia, the Philippines, Thailand). The reduction should have a phase-in and credible timeline to allow both banks and depositors to adjust their strategies and behavior accordingly.

b. Use a range of time-varying guaranteed rates
In combination with the outsized deposit coverage, the presence of a single ceiling rate (guarantee rate) has led to a highly skewed distribution of deposits around shorter maturities as the guarantee rate is, in reality, benchmarked against the central bank rate (BI rate).

If a guarantee rate is still desired, instead of setting a single ceiling rate, LPS could issue a range of insured deposit rates (i.e. with minimum and maximum interest rates).

Alternatively thus, guarantee rates could include a spread above certain benchmarks that might reflect averages of deposit rates offered by the sector over various maturities (e.g. sight saving, 1M TD, 3M TD etc). The spread could be capped at, for example, 25% of the averages, or more.

Time-varying guarantee rates will help establish a more market-based time structure of deposit rates. Such reference rates will reflect the fact that liquidity is a scarce resource and will help Indonesian banks to develop a fund transfer pricing (FTP) system.

A key lesson from the recent banking crisis is that banks should have an FTP system as part of the effective risk management framework to allocate risks, costs and benefits of liquidity.

Let us dwell on the time aspect a bit further.

Therefore, I find it remarkable that even state banks strive to price their longer term deposit below the guarantee rate. Only during the highly uncertain conditions (October 2008 - end-2009), the banks attempted to attract longer term deposit (6M or longer) by offering interest rates markedly above the ceiling rate. 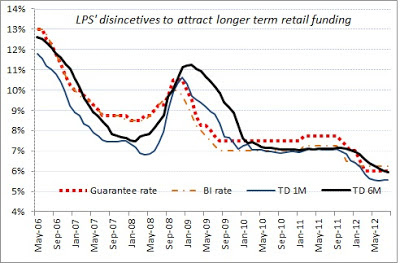 As a remedy, we could introduce time-varying guarantee rates as illustrated in the table below. This is not a novel idea. For a similar application/example of such interest rate restrictions, see the FDIC. 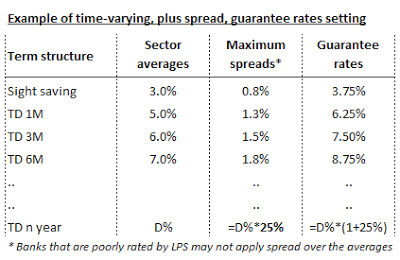 In a nutshell, the absence of time-varying guarantee rates had incentivized Indonesian banks to rely on liquid retail deposit, thereby ignoring the basics of liquidity risk management and contributing to the systemic liquidity risk build-up that I mentioned in the previous blogs.

I would like to refer to the Basel III accord again to underscore the concern on this matter. It too gives a clear signal that a higher share of time deposits (i.e. with remaining maturity longer than 30 days) is desirable.

In emerging economies with largely confidence-sensitive depositors, where deposit run-off rates could be very high, timely adoption of the Basel III liquidity risk framework is expected to raise systemic risk awareness as policy makers would likely be compelled to introduce higher run-off parameters for sight saving deposits to calculate the liquidity ratios.

Indonesian bank regulators are still silent about the systemic liquidity risks spurred by the flaws in the deposit insurance scheme. But timely adoption of Basel III in Indonesia could hopefully set off a debate about this subject and other missing prudential policies that would align incentives of key stakeholders with the long-run health of the banking sector (see also my previous posts here and here).

c. Optimize design and use of risk rating
A rating system that is reportedly being studied should account for a bank's contribution to systemic risk and makes considerable use of assessment scores produced by its direct bank supervisors. In my view, bank supervisors (BI or OJK) will know the bank under their oversight well enough thanks to years of examination and their insight cannot be replaced by any rating model.

In relation to point (b) above, LPS’ rating combined with supervisors' rating opinion could also be used as a basis to prohibit banks that have poor ratings to offer interests in excess of the above mentioned averages.
This is because poorly rated banks are likely in dire need of some liquidity and may attempt to increase their deposit base by offering unreasonably high rates.

d. Consider ex-ante and ex-post financing scheme
The banking sector currently finances the insurance scheme at 20bps of the deposit base per annum, which is quite low compared to Thailand for example. The planned differential premiums system could give a timely opportunity to set a range of premiums with a relatively high upper bound for most (systematically) risky banks. Consider for instance a range between 15bps up to 50bps per annum, at least until LPS' fund has reached at least 2.5% of the sector's deposit base.

Furthermore, to stimulate banking sector’s self-regulation, lawmakers could also introduce ex-post insurance financing. In this case, when capital of LPS falls below a threshold due to bank failures and resolution costs, the banking sector will be asked to make a greater contribution in one lump sum, or over a number of years.

An example of the deposit insurance scheme that combines ex-ante and and ex-post financing will be implemented in the Netherlands as of June 2013.

The distortionary features of LPS' deposit insurance scheme could decrease competition in the banking sector and might unfairly favor one stakeholder (e.g. shareholder, management) at the expense of other stakeholders (e.g. depositors, tax payers). The design flaws have also caused short-term maturity concentration and underpricing of retail funding in view of the generous insurance coverage backed by an implicit guarantee of the government/tax payers. Such government support could thus allow banks to persist in undue risk taking mode far longer than normal businesses could.

Some of the above ideas look drastic to many, in part because of limited interests in the media, or omission in the public discussion about the systemic threats stemming from misaligned incentives driven by suboptimally designed safety nets.

Therefore, the regulators ought to initiate the safety-net reforms to promote long-term financial stability and limit fiscal costs of future banking crises.