Relevance of Basel III and quality of implementation

Quality concerns can arise from lack of interest as well as from deficient institutional capabilities. In some rapidly growing emerging countries, the Basel III accords as well as other related prudential initiatives (e.g. on compensation, Living Wills, SIFIs charge, etc.) are not (yet) considered attractive or relevant by bankers & regulators alike. That Basel III is not a live agenda has also impacted negatively the necessary (operational) capacity building with regard to policy making and execution.

As stressed in many preceding posts, there is no better time than now to adopt the various global regulatory reforms in Indonesia (and in some other large emerging countries). For example, it is an opportune time for Indonesia's micro and macro prudential authorities to introduce higher capital and liquidity requirements when the profitability of the banking sector is being strong, in the backdrop of high loan growth, robust domestic demands and relatively favorable commoditiy export markets.

Even in 'bad' times, banks have ability to adapt to more demanding regulations without harming the wider economy according to this IMF study.

...but also a quality issue with the Basel III rule itself
One of Basel III's most relevant components is related to the the liquidity standards. Unfortunately, in January 2013 the liquidity rule (e.g. LCR) is made less rigorous with respect to retail funding.  The new rule says liquidity must be enough to cover a 30-day run on insured retail ("stable") saving deposits of 3 percent, instead of 5 percent.

Basel III's LCR is introduced to improve the short-term resilience of banks' liquidity risk profile under the assumption of a combined idiosyncratic and market-wide stress scenario. A higher run-off factor would force banks to hold high quality, but low yielding, liquid assets; or to reduce the share of demandeable deposits in the total retail funding in favor of more expensive time deposits.

In developing countries, if a medium-size bank is rumored to face solvency or liquidity problems, deposit run-off rate is likely to be very high, much higher than 5%; not in a 30-day horizon, but perhaps already in the first week. The run-off rate is even higher when more banks are said to be in trouble.

Frankly speaking, even a 30-day run-off factor of 10% for “stable” saving deposits is too low in many jurisdictions.

We have learned from the recent Cyprus crisis that the value of the deposit guarantee scheme is linked to creditworthiness of the government that is implicitly or explicitly backing it. Deposit guarantees would lose credibility when the government capacity to meet its obligations is in doubt.

The Basel III committee has actually anticipated the importance of idiosyncratic differences among member countries as it underscores the 'quality' aspects of implementation, for example from paragraph (77):

That said, empirical evidence on the customer deposit run-off during stress conditions (e.g. IMF, 2012) and experience in recent months indicates that the 3% run-off rate as an anchor is rather optimistic, if not misleading.

Some emerging countries should really subject 'stable' deposits to much higher outflows to capture sovereign risks and weak legal enforcements, transparency, public awareness of deposit insurance etc. It underlines the importance of quality reviews and regulatory consistency assessments also with regard to the implementation of the liquidity standards.

The unique case of Indonesia
Because of its particular features of its deposit guarantee scheme, Indonesian banks continue to accumulate retail saving deposits at the expense of more stable time deposits. Due to the very low saving interest rates, Indonesian banks have increasingly used CASA (current account and saving account) ratio as a key performance indicator. The chart shows the rising share of CASA ratio especially in the last three years. 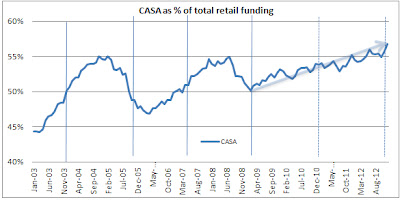 From an individual bank’s point of view, higher CASA is good for its profitability. But from the public interests’ point of view, the race for CASA will amplify the systemic liquidity risk because CASA is off course comprised of deposits that can be drawn down on demand.

The development shown in the chart is a form of maturity rat race as banks do not commit to limiting maturity mismatch (without government intervention). It is also a classic example of a collective moral hazard as banks do not fully internalize the social costs of systemic funding risks. The Basel III liquidity rule is expected to mitigate the collective moral hazard by giving more incentives for longer term time deposits.

For this reason, the liquidity rule is particularly relevant for the case of Indonesia because it reminds both bankers and regulators of the need to manage funding risks and to pursue the macro-prudential supervision, respectively.

To align the liquidity rule with the conditions of Indonesia's banking sector, I would suggest (at least) a 20% run-off factor for “stable” deposit and 30% for "unstable" deposits. The rates might be decreased upon sound regulatory arguments supported by proper empirical evidence as well as after fixing the deposit guarantee scheme.

Compare this with outflow rates now being pondered by the EBA for the EU.
at 3:31 PM No comments: