It has been argued before that the Basel III liquidity standards are expected to be more consequential in many emerging countries. The new liquidity framework entails the Liquidity Coverage Ratio (LCR), which indicates banks’ ability to withstand a short-term liquidity crisis and the Net Stable Funding Ratio (NSFR),  which measures the long-term, structural funding mismatches in a bank.

Until now however, Basel III does not seem to be an agenda really influencing Indonesia's policy making and the liquidty rule has interested stakeholders even less. Publication of a separate consultation paper (CP) on the application of the new liquidity standards would be a remedial step. A CP on the liquidity standards needs to display sufficient details and concrete proposals supported by impact assessment on the banking sector and national regulations. As an encouragement, this article might serve as a background analysis of Indonesia's banking environment relevant for the application of the Basel III liquidity rule...

The liquidity rule was introduced because during the global financial crisis started in 2007, banks became overexposed to liquidity shocks due to excessive maturity transformation in their balance sheets. A number of banks which failed had high reliance on very short-term (wholesale) funding.

Financial intermediaries in Indonesia are still dependent on retail deposits to finance their lending business. Because retail deposit is widely seen as more stable than wholesale and interbank funding, systemic liquidity risk is not a pressing issue given the high deposit guarantee provided by the Indonesian Deposit Insurance Corporations ('LPS'). This is however true only for the short or medium term. I have mentioned before that the deposit guarantee scheme in Indonesia, by far the highest in terms of per capita income, would have negative ramifications for banks' risk taking and fiscal risks.

As if taking advantage of the generous explicit guarantee by the LPS and implicit guarantee by the government, Indonesian banks have been boosting current and saving accounts (CASA), or the non-maturity deposits, because they are much cheaper than time deposits (TD). Saving interest rates centered around 1% - 2% versus 4% - 5.5% on time deposits (6 month).
The data of TD ratio and CASA ratio in Indonesia's banking system span from Jan 2003 to June 2012. As you can see in the chart below, TD and CASA ratios went up and down around the 50% line. The recent delay, or absence,  of reversal to the mid-line can indicate a build-up of systemic liquidity risks since the inception of the high deposit guarantee coverage around the end of 2008. 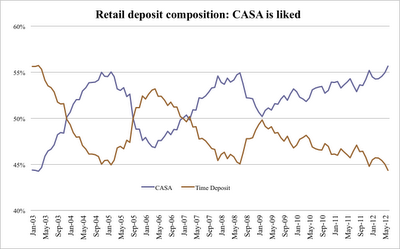 Put differently, high reliance on CASA is risky and can expose the country  to a systemic liquidity risk as depositors withdraw their money from banks at a large scale at the same time, for any reason, despite the deposit guarantee scheme.

At least, that learning point is what is implied from the parametrization of the liquidity rule. For example, in calculating the LCR, CASA and TD with a remaining maturity less than 30 days have to be backed by highly liquid assets as they face a run-off factor between 5%  - 10% depending on the nature of account characteristics. These are minimum percentages as national jurisdiction may impose more conservative parameters. It is notable that a lion share of TD offered by Indonesian banks clearly has remaining maturity of less than one month. The CASA ratio as charted above is hence understated according to Basel III.

Upon implementation of the LCR, Indonesian banks might have to increase their stock of qualifying liquid assets in view of the high CASA ratio. In many countries, say in the core euro zone, increased liquidity buffer requirement is a drag on profitability since the yield on government papers is generally very low, often much lower than sight saving interest rates. The implication is consistent with the intention of Basel III to give banks incentives to collect more TD.

But Basel III implementation in Indonesia will not necessarily reverse the CASA upward trend.

In contrast to many other countries, Bank Indonesia's securities (SBI) and its deposit facilities offer interest rates that are materially higher than CASA interest rates, as a consequence of Bank Indonesia's need to finance growing international reserves.
As long as Bank Indonesia maintains a monetary policy regime that requires it to continue absorbing excess liquidity in the banking system via open market operations, application of the Basel III liquidity rule shall not diminish the banks' reliance on short-term retail funding. As profit maximizing agents, banks will continue increasing the CASA ratio, and use part (or all) of the collected deposits to further accumulate 'risk-free' governement or central bank debt securities.
There exist a free lunch here, especially for bigger banks, since retail deposits are underpriced due to the presence of the generous deposit guarantee scheme and BI continues to rely on SBI and time deposit facilities as the main instrument to withdraw a structural excess liquidity.

Need of monetary policy adjustment
Application of the Basel III liquidity rule in Indonesia should be considered within the context of both macro prudential and monetary policy making. Its effectiveness will also be eroded without an amendment to the current deposit guarantee scheme.

Better understanding of Basel III implementation would help the search of appropriate monetary policy initiatives to address risk issues and dilemma mentioned above or elsewhere in this blog. We have the issues that are curiously enough least mentioned in the media: rising CASA share, excess credit growth and (big) banks' excess profitability that might have impeded an emergence of strong competition. On the other hand, we have another issue that is being underestimated concerning large financial losses of Bank Indonesia arising from significant carrying cost of international reserves (represented by the difference between the yield on the reserves and BI's funding cost).

There is no such thing as a perfect mix of prudential and monetary policy. That being said, one such policy initiative that can lead to lower monetary policy costs, and bolster the prudential impact of Basel III on liquidity risk management is higher reserve requirement (RR), targeted to reduce maturity and currency mismatch. Such RR is both a monetary and prudential policy instrument and, while not simpler, can be deployed quite readily. See this IMF study about various designs of RR (page 70).

Higher and targeted RR would also strengthen the stability of the financial system, can improve the transmission mechanism and support the inflation targeting regime pursued by BI. Similar point is made in this paper (Montoro, 2011) in the context of a general equilibrium model.

RR is indeed a tax on financial intermediation and may curb credit activities. Nonetheless, amid excess credit and profitability growth as well as worsening external balance, there is no better time to at least prepare for it. After all, higher RR will help eliminate or lessen BI's financial loss which would undermine its independence if not addressed timely.

I believe Bank Indonesia should consider finetuning its monetary policy instruments. Reducing the yield on the FASBI deposit facility, and employing RRs that differ by deposits maturity are the monetary tools that have been missing until now. Its cost and benefits along with the implementation of Basel III's liquidity requirement are worth pondering. I hope to address them in another occassion...