Just a few days before the closing of 2012, Bank Indonesia supplemented its capital regulation with further guidance on the Pillar 2 processes.
In doing so, it marked the completion of the Basel II adoption in Indonesia. Congratulations....

The Pillar 2 process is essentially the second phase of Basel II and involves an assessment of the additional capital that is required to mitigate those risks that are not adequately covered in Pillar 1.

The following table shows the new minimum capital ratios within the Pillar 2 framework:

Is it a sound approach?

When this blog was launched over four years ago, the idea then envisaged was to share resources and experience about implementation of the Basel II accord with an emphasis on its Pillar 2. One of the thoughts or concerns was that Pillar 2 practices had been widely varying among early adopters- especially for the internal capital adequacy assessment process (ICAAP). The ambiguities and lack of standards would not help later adopters to interpret the depth and implication of Pillar 2 requirements, leading them to adopt a less robust approach instead.

The issues that I want to highlight now are related to the problematic use of the risk-based bank rating (RBBR) as determinant of the minimum capital adequacy ratio (CAR) and the inadequacy of the new rule to advance risk management practices and encourage sufficient capital buffers over the minimum requirements.

I also argue at the end of this post, that the minimum ratio for Indonesian banks should be much higher if the industry wishes to apply fully and thoroughly Pillar 2 of Basel II and all capital buffers under Basel III. After all, the regulatory minimum in good times must substantially exceed the minimum standard in bad times.

But first of all, I turn now to the use of BI's composite rating approach as key part of the new capital regime.

Drawbacks of the risk-based composite rating approach
The main concern with the use of the composite rating is that it is less useful for capital adequacy assessment because in practice, it unlikely becomes an integral part of banks´ risk management system and day-to-day decision making process. Such a scoring card system has been used in the Netherlands for example, basically as a first input to perform peer comparison and prioritize supervisory efforts (see APRA or Bank of Spain for a similar approach). Such a model is also used for strengthening the ability of supervisors to make better judgment and take effective actions.

Even as a supervisory tool, BI's composite rating model needs to be improved in a number of areas.

Firstly, it should explicitly account for interest rate risks in the banking book, which is one of key Pillar 2 risks and perhaps also liquidity risks.

Secondly, the model should rely less on historical financial ratios. The current approach would not be responsive to changes in risk conditions and is not very forward looking. Today's banking supervision has drawn lessons from the financial crisis by paying more attention to the story of the future, i.e. business models, strategic choices, behavior and culture of a bank. Traditional financial ratios are deficient because they tell an old story.

The use of profitability ratios for example as an important determinant of the rating is suspect as long as the front-loading of banking earnings is enabled by the current accounting regime. The current global financial crisis shows how higher profitability in the banking industry is often obtained by relaxing underwriting standards, taking liquidity risks or levering up.
Even the forward looking provisioning regime currently in consultation could only partially mitigate the short-run orientation of the profitability ratios.

Last but not least, the composite rating as a basis to calculate capital add-on provides reduced incentives for advanced risk and capital management, to which we now turn.

Need of more direct links between specific risks and capital coverage
The objective of risk sensitivity championed by the Basel II accord could be better achieved by banks specifically establishing for which risks a quantitative measurement is warranted, and for which risks qualitative factors are dominant and to be mitigated using risk management tools. A lesson from the recent financial crisis is that a bank failed especially due to its overweight exposure to idiosyncratic material risk (eg. liquidity risk, concentration risk in real estates and excess credit growth).

As we all know, Basel II identifies three major risks to be covered by Pillar 1 capital: credit, market and operational risks. Accordingly, for the Pillar 2 framework, assessment and capital coverage of non-Pillar 1 risks should continue to be direct and transparent just like under Pillar 1.

Pillar 2 risk types need to be identified as relevant and material for a given bank. Subsequently, the material risks need to be quantified and backed with an adequate amount of economic (or ICAAP) capital, according to models that are appropriate for the size and complexity of the bank (ie. risk based, bottom-up assessment).

The following figure shows an example of how each relevant material risk type is accounted for in an ICAAP: 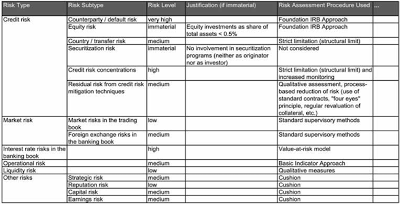 The key point is that bespoke methodologies to determine capital needs for each risk type, as illustrated in the chart, would incentivize banks to link risk models and capital management more closely, leading to a better risk capture.

Highlights of alternative steps to calculate risk capital can also be found in e.g. papers by EBA/CEBS, Bank of Finland and Bank of Spain. For the European banks perspective, see here.

Therefore, a sensible institution would maintain capital buffers over and above the regulatory minimum to be consistent with banks’ risk appetite, growth ambition, external factors or reputation enhancing objectives (such as high credit rating). In the case that capital ratio falls below the internal capital target due to rapid growth, etc., a sound bank would consider in its ICAAP document a realistic and prudent plan for returning to their capital target.

In many jurisdictions, the UK for instance, capital buffer above a total of Pillar 1 and Pillar 2 capital should also be in place so that regulatory capital requirements continue to be met even in economic downturns.

Link to Basel III
Basel III is essentially a reform on the Pillar I of the Basel II framework. Hence, pillar 2 process will continue to embody the spirit of Basel II/III.

In the ICAAP, capital target ratios should also be calculated using Basel III parameters, at least within the context of migration to the Basel III end-states in 2019. By doing so, the ICAAP could help pave the way for implementing Basel III before its implementation is formally effected (between 2014 - 2018).

The rationales and ramifications of Basel III will be better understood by the banking sector if they have performed a sound ICAAP and established appropriate capital targets to cover their specific risk exposures, external factors, business plan, and stress testing. In fact, capital targeting and capital planning have been partially formalized in Basel III’s capital conservation measures that generate buffers for bad times (see further in the last part).

Summary
The central tenet in the above commentary is that even a bank perceived to have the lowest risk profile according to the composite rating model still needs to perform capital attribution per risk type, comply with its own internal capital target over the minimum capital ratios and demonstrate that its own fund is adequate according to supervisor's and its own firm-specific stress tests.

The use of composite rating to determine capital add-on could hold back the necessary transformation in the banking sector, which is desired by the Basel II/III accords: to improve risk management, to better align risk with capital needs - and although emphasized only recently - to strengthen financial stability and reduce moral hazard.

A more direct, specific and transparent framework approach for risk capture along with respective capital attribution as mentioned above would compel banks to understand their risk drivers and further intensify their risk management efforts.

Within the interim period up to 2019 when Basel III reaches its end-state, a full and sound Pillar 2 process is suitable to tackle possible gaps in capital and liquidity adequacy in the Indonesia banking sector.

Future direction of capital regulation in 2013 and beyond
So it seems obvious that we need to have a more risk-sensitive capital regime and thereby incentivizing the adoption of state of the art risk models, when applicable.

A more fundamental requirement eventually however is to ensure that Indonesia banks remain adequately capitalized also during difficult economic conditions.

The banking sector is currently highly profitable. In particular, domestic systemically important institutions (D-SIFIs) have managed to sustain profitability - staggering by international standard - on the back of implicit government support and rapid loan growth. In my view, the high profitability is providing an ample incentive for banks to maintain a high level of capitalization in order to protect their franchise, thus even without minimum capital standards.

This highly profitable episode that has been aligning interests of shareholders, bankers and taxpayers could end in face of less conducive economic, regulatory, funding/liquidity and competitive environments. The potential for a misalignment of interests among stakeholders is also a feature of financial stability risks. Unfortunately, despite this being a central theme of the global regulatory reforms, you do not hear much in Indonesia about the risk of moral hazard from the rise and fall of banks.

That is why, future revisions of the capital adequacy regime should ensure that the required Pillar 2 capital add-on can capture:
a. Country specific risk  (2% point) associated with Indonesia being an emerging economy, etc.;
b. Institution specific risk capital add-on based on a proper Pillar 2 process (say 5% point). This will foster the link between day-to-day risk and capital management;
c. Specific capital add-on for systemically important bank (eg. add 1.5% point). See for a Swiss example here and for why bigger banks should hold a greater capital buffer here ;

In a scenario that the same bank turns reckless during a credit boom period, the minimum CAR could rise from 14% to 21.5% due to:

* deployment of the countercyclical buffer of 2.5%;
* additional capital charge of 5% - for example because it is running a highly concentrated credit portfolio combined with material interest rate and liquidity risks.

If the capital regime just announced turns out to be too meager, is a considerably more prudential capital framework achievable and sensible?
The answer is yes because average commercial banks CAR has already exceeded 17% for some time (CEIC).

In good times like now, why not just seize the global momentum to introduce a capital rule that also arrests incentive distortions and moral hazard risks?
After all, good and prudent banks will welcome a more risk sensitive and conservative capital regime because they want to keep their banking franchise sustainable.