Indonesia has a track record of prudent fiscal management prior to the global financial crisis and only introduced a modest stimulus in 2009 and 2010. With its fiscal position among the strongest in ASEAN (see below) and perhaps among emerging economies, Indonesian fiscal outlook is arguably not a hot topic today. 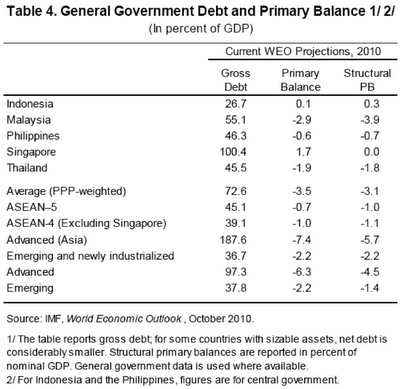 Yesterday's parliamentary briefing by LPS (Indonesia's Deposit Insurance Corporation), however, reminded us of potential fiscal risks arising from the curent deposit insurance arrangement, which were unfortunately left undiscussed. It appears that merely the case of Bank Century (the fallen bank controversially taken over by LPS in 2008) has fascinated the lawmakers and the media....

I am quite puzzled by, first of all, the still very high level of the current deposit insurance coverage. And it seems that the Ministry of Finance has voiced no plan to cut back the scope of the scheme and to refocus on protecting smaller depositors as intended by the 2004 LPS law (see its enclosed notes).
Assuming USD 1 = IDR 10,000 for convenience sake - today’s rate is about 9000 rupiah per US dollar - the insured amount is USD 200,000 since end-2008. This figure is high in relation to the Indonesian per capita income (now almost USD 5000 per annum) and also, compared to the median size of guaranteed customer deposits in developed countries (i.e. USD 130,000).

LPS and the state are close to offering a blanket coverage of retail deposits, which will eventually damp the risk senses of depositors and diminish incentives for banks to remain prudent.

Secondly, I am afraid LPS’ capital needs to be beefed up as a result of the expanded guarantee (from USD 10,000 to USD 200,000!) and considering that the fair value of its equity stake in the rescued and closed banks is less than the book value.

Note that according to the LPS law (2004), it is the Ministry of Finance that will provide liquidity assistance and/or equity injection should the LPS asset - reportedly about USD 2.25 billion as per end November 2010 - fall below its original equity amount (i.e. USD 400 million). With total insured deposits amounting to approximately USD 130 billion (about 76% of GDP), use of tax money would inevitably be solicited IF one or two small-mid sized banks collapses.

Moral hazard
The first issue concerning the large insurance coverage per customer gives rise to moral hazard. Moral hazard here arises when bankers run high risks, notably liquidity risks, and reap profits as they think the government will help if things go wrong.
The current financial crisis has taught us how the moral hazard problem is seriously damaging. The implicit guarantee and, very often, the underpriced funding (through its access to central bank borrowing facilities in combination with easy monetary policy) enabled banks in industrial countries to pursue above-average profitability targets and create conditions for excessive remunerations. See among other this BIS/Bank of England article surrounding the implications of the banking safety net.

The close relationship between the generous deposit insurance and banking sector profitability might also apply in Indonesia. A rigorous analysis on the topic is yet to be made but this news article says that Indonesian banks would book staggering profits for 2010.

Possible underfunding
Indonesia is recognized by the IMF as one of the pioneers in fiscal risk analysis among emerging market economies.

Nonetheless, banking crises (see the IMF new database) caused some of the largest fiscal costs arising from contingent liabilities and therefore should take a more central stage in the Ministry of Finance' fiscal risk statements. Implicit or explicit guarantees usually do not cost much. But when the guarantees are called upon, what they cost often come out as an ugly suprise.

Recall again the current Irish saga. Ireland is an exemplary story of rapid growth with high scores on competitiveness and macroeconomic policies, but now being overwhelmed by sovereign default threats since the government was (or felt) obliged to nationalize the banking sector, whose size was much larger than Ireland's economy.

If LPS is indeed underfunded, it is only fair and logical that the banking sector raises its contribution to LPS. It will not only trim down the fiscal risk but also the hidden risks to financial stability inherent in a banking sector that enjoys an implicit state guarantee, and low interest rates environment thanks to LPS' implicit customer deposit rate ceiling and central bank's stimulative monetary stance (see my previous post).

Furthermore, I believe that in order to moderate the identified moral hazard problem, LPS' insurance premium soon has to be set on risk-sensitive bases where lower rated banks pay more and banks perceived to be safer pay less.
at 2:57 PM

The Deposit Insurance Scheme provides limited compensation to selected eligible deposits placed by insured depositors with full banks and finance companies. Just hope that it will work to both parties.